The Kentucky Derby is an annual event that is always a hive of activity in the build up and afterwards.

Also known as the “Most Exciting Two Minutes In Sports” and “The Run For The Roses”, it is one of the most significant events every year within horse racing, because it is the first leg of the iconic Triple Crown.

Tickets consistently sell out for the Kentucky Derby, as it is one of the highest attended events within horse racing. You can, however, still bet on these races even if you haven’t been lucky enough to purchase tickets. Check out where to bet on kentucky derby here.

This is a guide covering the Kentucky Derby, including how it first originated, traditions, and the culture surrounding it.

The Kentucky Derby always takes place in May at Churchill Downs, which first opened in 1875 and was named after Samuel Churchill.

The venue itself can be found in Louisville, Kentucky, and is widely known as the epicenter of thoroughbred horse racing.

While there are a range of horse racing events that Churchill Downs hosts every year, none are as popular as the Kentucky Derby. The clubhouse features historic twin spires, and luxurious suites, not to mention capacity for 50,000 seats.

The dirt track which the horses race on is oval shaped, and is one mile in circumference. There has also been a museum added to the venue, to celebrate the history and origins of the Kentucky Derby among other races.

Because it began centuries ago, the Kentucky Derby maintains many traditions. These include the fact that the races begin on the first Saturday in May annually. The winner of the Kentucky Derby race is given a garland of roses, which is where it gets the nickname “the run for the roses” from.

It is also believed that wearing a hat to the Kentucky Derby will bring good luck. The twin spires seen on top of the Churchill Downs are also believed to be traditional, which is why they have been carefully preserved over the years. They are some of the venue’s original features that are often associated with the iconic Kentucky Derby.

As with any horse racing event, the standard for racers is very high. Thoroughbred colts below the age of four are some of the most frequently seen racers. However, geldings and fillies can also be seen in the Kentucky Derby.

Depending on the horse’s temperament, training and capacity for speed, they carry around 126 pounds as a rough guide. Jockeys and riders need to train hard and ensure that they are as streamlined as possible.

There is, of course, rigorous selection which takes place leading up to the Kentucky Derby, which is why there is normally a sense of professionalism within the racers. They all have their own profiles and experience that led them to that particular event.

Another thing worth mentioning about the Kentucky Derby is the culture that exists around the entire event. It is widely seen as a symbol of class and even financial success to be attending the Kentucky Derby. That is why people adhere to formal dress codes, and many enjoy dressing up for the occasion.

Smart dresses, formal hats, and suits are widely seen in the audience at a regular Kentucky Derby. Something that may help enforce the formal dress code is the fact that the Queen of England, Elizabeth II has been known to attend the Kentucky Derby on occasion.

It was something that her majesty had always wanted to do, and in 2007 she witnessed the event in person.

The culture does not end with the dress code, however. People from all parts of the country travel to Churchill Downs in order to attend the Kentucky Derby.

From hotels and restaurant reservations, to dresses and suit rentals, Louisville truly is a hive of energy around the first Saturday of May. 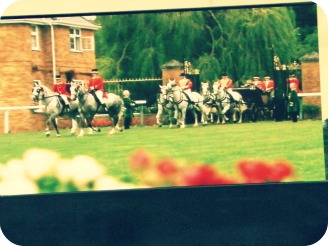 Thoroughbred horses and racers compete on the track in Churchill Downs, where they attempt to win the blanket of roses given to the winner at the end.

Formal dress is essential for the Kentucky Derby, and it has always been a symbol of class and sophistication.

Royal connections and betting are part of what keeps these events alive, and it is one of the most popular events within the annual horse racing schedule.