Seven is a very special number at Ascot Races - read on....

Founded in 1711 by Queen Anne, the very first race meeting held at Ascot was “Her Majesty’s Plate” held on 11th August that year.

Remaining the centrepiece of the annual calendar at the world-renowned racecourse, the very first Royal Ascot event featured seven horses competing in three separate four-mile heats for the prize.

Little would they know back then just how significant the number seven would remain with the Berkshire racecourse.

When it comes to individual achievements over the years at Ascot Racecourse, there’s one in particular that stands out from the crowd. During the course of one unforgettable day back on 28 September 1996, Italian jockey Frankie Dettori increased his fame and popularity to an entirely new level.

Stunning punters and bookmakers alike, Dettori masterfully rode all seven winners on British Champions’ Day, completing a feat that has never since been repeated at the event. Indeed, an archived article at The Independent captures the emotion of that special day, while also highlighting how it forever changed the life of not only the Milan-born jockey but also those who witnessed the races and backed each of the races.

The Magnificent Seven: Ten Winners in a Day - How Frankie Dettori Achieved the Impossible, penned by sporting author Graham Sharpe, recounts how not only was this one of the greatest accomplishments in horse racing history, it also proved costly for bookmakers. At odds of over 25,000/1 to win all seven races, the bookies had to pay out over £40 million in winnings according to estimates at the time.

Also celebrating his life in horse racing and that Ascot achievement, in particular, is Frankie Dettori’s Magic Seven slots, which is one of the games that can be played at the https://www.mrgreen.com/ie/ online casino. The game by Playtech features five reels and 25 paylines, as well as the likeness of the man himself. 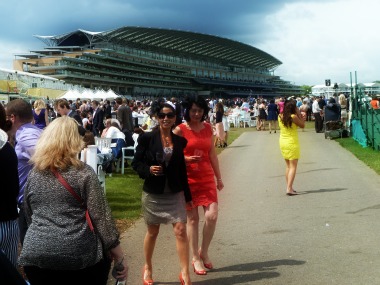 Seven Ascot Dates To Watch In 2019

While there are a host of notable races of different grades held throughout the year at Ascot, there are perhaps seven events which get the most attention.

These events usually guarantee that the magnificent Ascot Stand, completed in 2006, is packed to the rafters with eager race-goers.

Getting the year off to a fine start is the Clarence House Chase, a Grade 1 National Hunt steeplechase run over 2 miles and 1 furlong, held at Ascot in January each year since 2013. French-bred Un De Sceaux will run again in 2019, having won the event three times in 2016, 2017 and 2018.

Following swiftly in February is the Ascot Chase, another Grade 1 National Hunt steeplechase over two miles and five furlongs, first run at the course in 1995.

Heading forward to the end of May is the flat handicap Victoria Cup, run over a distance of seven furlongs and won by Ripp Orf in 2018 with a record 1:25.40 time that will take some beating.

Hot on the heels at the start of June comes the Gold Cup, widely regarded as one of the most prestigious races for “stayers” over the lengthy distance of 2 miles 3 furlongs and 210 yards, held during the annual Royal Ascot event.

July brings us the King George VI and Queen Elizabeth Stakes, a Group 1 flat race with a prize fund of £1,000,000, making it the second richest horse race in Britain, only exceeded by The Derby.

Always popular in August and held at Ascot since 2000 is the Shergar Cup, honouring the legendary feats of the iconic horse that was owned by the Aga Khan. Typically, this event attracts over 30,000 spectators each year.

Finally, October is the month of the most famous of Ascot events, with British Champions Day regarded as the highlight to the end of the British flat racing season.

Group 1 races include the British Champions Sprint Stakes, British Champions Fillies’ and Mare’s Stakes, Queen Elizabeth II Stakes, and of course, the Champion Stakes. In 2019, prize money across the race card will be a record £4.35m at this end-of-season classic.