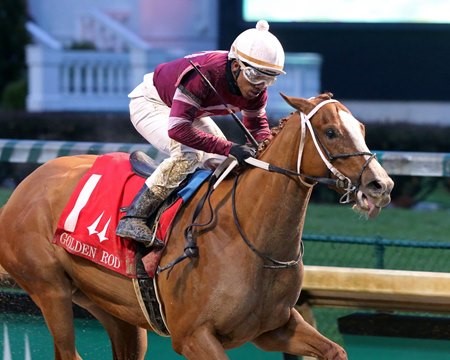 However, the 1 1/8 mile Grade 1 contest has faded into the woodwork as a legitimate measure of class for Kentucky Derby contestants.

Since 2004, none of the top three finishers in the Wood Memorial have had an impact on the Kentucky Derby.

For the last two years, Wood Memorial runners rounded out the Derby Superfecta in fourth place, as did Tale of Ekati in 2008. Perhaps one of the colts below can reverse the trend for the 2015 Kentucky Derby.

EL KABEIR (Scat Daddy - Great Venue, by Unbridled's Song) has never been worse than fourth in eight lifetime starts. He ruled the New York Prep races, until Far From Over broke El Kabeir’s winning streak in the Withers Stakes.

El Kabeir came back to triumph by 2 ¾ lengths in the Gotham over Tiz Shea. The notable point about the victory was that El Kabeir changed his front running style to come from off of the pace.

That versatility can only help him with distance in the Wood Memorial. El Kabeir’s immediate family is loaded with talent. Four of his dam’s five half siblings own blacktype.

FROSTED (Tapit - Fast Cookie, by Deputy Minister) couldn’t compete with the likes of Upstart in Florida. In the Fountain of Youth, Frosted found himself contesting the lead, but couldn’t sustain the run and tired to fourth place.

I don’t think this colt likes to pass other horses. Other than outclassing a maiden field, Frosted has been second or third in every start. The pretty gray colt’s dam is a multiple graded stakes winning miler.

She’s a half sister to the Champion Juvenile Midshipman. His second dam Fleet Lady is also a multiple graded stakes winner. Frosted should handle the 1 1/8 miles, but I don’t think he’ll get under the wire ahead of the field unless nobody else is up to the task.

DAREDEVIL (More Than Ready - Chasethewildwind, by Forty Niner) made his three year old season bow in the seven furlong Swale Stakes, finishing a good second after going three wide on the turn chasing a loose on the lead Ready for Rye.

It was ten lengths back to the third place horse. Daredevil is a half brother to Donn Handicap (G-1) winner Albertus Maximus and to graded stakes placed Chasethegold.

His dam is a half sister to the dam of Forgo Stakes (G-1) hero Here Comes Ben. Daredevil’s second dam Race The Wild Wind is a multiple Grade 2 winner.

Daredevil should handle the distance and the competition isn’t too tough. Trainer Todd Pletcher has won two of the last three editions of the Wood Memorial.

TIZ SHEA D (Tiznow - Ender's Sister, by A.P. Indy) faced the more experienced El Kabeir on his own ground in the Gotham. The Bill Mott trainee was boxed behind horses when the running began and found a pinhole opening on the rail late to hold second place by a head.

It was a very courageous effort for only his second start. Tiz Shea D has the pedigree to love 1 1/8 miles and could handle the Belmont Stakes distance comfortably. His dam is a multiple graded stakes winner at 1 1/16 miles and her full brother Ender’s Shadow is multiple stakes placed.

Plenty of back class here, as his third dam is the multiple stakes winning veteran Fit for a Queen. Tiz Shea D could steal the race with a better trip. Keep an eye on this one.

LIEUTENANT COLONEL (Colonel John - Lovely View, by Carson City) was beaten like a new recruit in the Gotham Stakes. His pedigree is stamina over plenty of speed. He may have had an excuse last time out, but I think the distance is too far. Perhaps he can round out the superfecta with a good trip.

TOASTING MASTER (Congrats - Broadway Gold, by Seeking the Gold) loves to run on the lead, but he’s finished off of the board in his last three starts.

Toasting Master has a good pedigree, but this may be too far and he doesn’t appear to be able to handle this class level. He’s a half brother to multiple stakes winner R Gypsy Gold, Razorback Handicap hero Golden Lad, and Grade 2 winner and Kentucky Oaks runner-up Broadway’s Alibi.

Their dam is a stakes winning half sister to Florida Derby hero and new sire Dialed In. Second dam Miss Doolittle placed in the Schuylerville Stakes (G-2) as a two year old and the second dam Eliza earned Champion 2YO Filly honors.

TENCENDUR (Warrior's Reward - Still Secret, by Hennessy) has watched the gray hind end of El Kabeir pull away in their last two meetings. I don’t see a reversal here. Tencendur has, at best, a miler’s pedigree and also appears to be outclassed.

Race Keys: Four of the last five Wood Memorial winners shipped in from Florida, while the fifth was third in the Gotham. In the last ten years, half of the winners won their prep race.

There is a ton of speed in the Wood Memorial. El Kabeir has shown that he can sit behind the speed, but If he has to go too wide at this distance, he may not sustain the bid.

Daredevil fits the race keys, is trained by Todd Pletcher, should handle the distance and shook the rust off in the Swale. Tiz Shea D has the best pedigree in the field for the distance.