Your ultimate guide to
Glorious Goodwood

The Goodwood Racecourse, just five miles from Chichester, West Sussex, England is owned by the family of the Duke of Richmond.

The highlight of the flat racing calendar is this Glorious Festival held every year in July/August. The meeting stages two Group One flat races, the Sussex Stakes and the Nassau Stakes.

Ladies Day on Friday 4th August 2017 is an essential feature of the Goodwood Festival and this year the winner of the best dressed competition enjoys a five day trip for two to Cape Town with all expenses paid.

The unique turf course is widely held to be the most attractive in the land with its rolling hills and glorious views incorporating an old iron age hill fort used as a natural grandstand.

Form at the course is a valuable asset for horses racing here as the undulations and turns are unique to this famous racecourse.

Failing form at Goodwood the nearest equivalent is found at Epsom, Beverley or Brighton.

The track consists of a straight 6 furlong course known as the 'Stewards Cup Course' ending in a tight right handed loop on which there are starts for other distances. 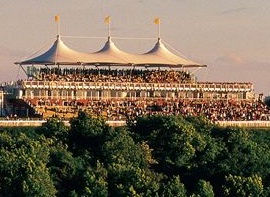 A few general trends show that favourites do well here with a profit possible by backing all horses with Starting Prices ranging from odds on to 7/2.

Trainers who fare well at this unique course include

Has the best record here and often rests his horses for 2-4 weeks prior to a run here and mostly his winners had not won last time out and carry 9st 4lbs+.

Does best in races over 1-2 miles and 3yo/4yo+ events especially with Ryan Moore on board.

Usually hits his stride at this time of year though prices rarely go above 8/1 while races at 1m2f - 1m6f produce most winners.

Ryan Moore, born and bred in East Sussex, knows the track well and usually records a good profit here but does less well in large fields of 18+

It is woth noting that from April 2011 there has been a switch for Right Handed courses in which the inside stall is always No 1.

Before this change races over

Since 2000 every winner had raced within 6 weeks of this race and usually came in the top 5.

11 of the 14 winners had not raced beyond a mile

6 of the 14 winners won last time out

6yo+ have a poor record

This 2m5f marathon demands plenty of stamina and the winner will have won over at least 2m.

A win this season is important and recent a run in the past 6 weeks an advantage.

The younger generation tend to dominate with 4yo - 5yo carrying 9st6lbs or lower more likely to come out on top.

Favourites do well and don't expect a price more than 12/1 while jumps trainers are just as likely to seize the prize.

Favourites do well; 8 have won in the last 17 years

Top contenders this year are Kingman and Toronado

Key stat for this race is the participation in the Newmarket equivalent.

Another race for favourites; 8 favourites have won since 1997

No horse has defied and absence of more than 60 days

Only 3 winners had not raced beyond 2 miles

A high draw (16+) is a definite advantage

Win over a mile is paramount

Only 2 winners aged older than 6

15 of last 17 winners had won at the distance

Concentrate on horses that prefer to be ridden prominently

Only 5 winning favourites since 1997

Most winners have had between 1 and 3 runs this season

Most winners achieved a top 5 finish last time out

No winners have failed to win a 6f race