Youth Spirit’s Epsom Derby claims were boosted when Andew Balding’s charge won the Group 3 Chester Vase at the Roodee on 5th May 2021 with some authority. 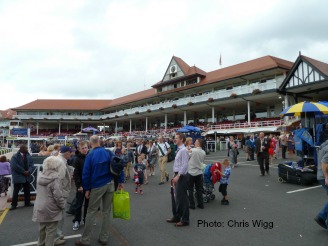 Chester Racecourse known as the Roodee

His jockey, Tom Marquand was unsure whether his mount would get the mile and a half trip but he responded well when asked the question and ran out a comfortable winner by 1 ¾ lengths.

The horse’s owner, Ahmad Al Shaikh almost won the Derby last year with the runner up Khalifa Sat and hopes to go one better on June 05 this year with Youth Spirit.

The Chester Vase has become almost a trial for the Epsom Derby in recent times; Ruler Of The World won both races in 2003 and the runner up in 2017, Wings Of Eagles went on to win the Epsom Classic.

Balding’s father, Ian trained the Derby winner Mill Reef and his son is looking to repeat the feat, having won the Oaks with Casual Look in 2003 and achieving a 4th place in last year’s Derby renewal with Kameko.

Runner up, Sandhurst was Aidan O’Brien’s sole runner after the withdrawals of Sir Lamorak and Sam Martino. His jockey Ryan Moore said: “He’s come forward from his first run and has taken to it well”.

Others with Epsom Derby Claims

Other top contenders are lining up to strut their stuff, none more fancied than Bolshoi Ballet and Mac Swiney who will both contest the Derrinstown Stud Derby Trial at Leopardstown on 9th May.

Aidan O’Brien’s Bolshoi Ballet impressed with a superb performance in the Ballysax Stakes over course and distance in April 2021, winning by 2 ¼ lengths under jockey Ryan Moore. A follow up win in the Derby Trial will cement his Epsom Derby claims and 2nd place in the market, currently around 6/1.

Jim Bolger’s Mac Swiney won the Group 1 Verterm Futurity Stakes over 1m at Doncaster last October and his results suggest he prefers the going soft as both his defeats came on good ground. Any rain will boost his chances in the Derrinstown and will reveal if he has the stamina for 1m 2f or more.

His trainer has got off to a flying start this season after his charge Poetic Flare won the 2000 Guineas and a win for Mac Swiney at Leopardstown will see his price for the Epsom Classic (currently 12/1) shorten considerably.

Aidan O’Brien has strong Epsom Derby claims as his High Definition and Van Gogh are also declared to run. The former is currently installed as favourite at a general 3/1 and it’s not hard to see why, as he remained undefeated as a 2yo.

He began his campaign in August 2020 by winning his maiden at the Curragh over a mile and followed that in September with an effortles win in the Group 2 Alan Smurfit Memorial Beresford Stakes over the same course and distance.

Van Gogh has had a much busier schedule with 8 races already under his girth. The 2 stand outs were his maiden win in September 2020 at the Curragh and a win at St Cloud in France where he comfortably ran away with the Criterium International (Group 1) (2yo Colts & Fillies) (Turf).

He evidently needed the run when opening his 2021 campaign with a 7 length defeat to stablemate Poetic Flare in the 2000 Guineas at Newmarket.