It would be a travesty to not start this article off by bidding farewell to the genuine equine hero, American Pharaoh. For the first time in the 32-year history of the Breeders Cup, a Triple Crown Champion claimed the "Grand Slam" of horse racing by capturing the Breeders Cup Classic.

By doing so, American Pharaoh stamped himself as one of the greats in American horse racing history.

Of course, his victory in the Classic was bittersweet after the brilliant mare Beholder had to be scratched at the last moment due to illness.

Regardless, racing fans owe him, owner Ahmed Zayat and trainer Bob Baffert a big thank you for gracing us with equine excellence.

As for Beholder, the beautiful mare just doesn't travel well outside California. The plane trip to Lexington got her a little worked up, which resulted in a temperature and a bit of mucous in her lungs.

The real losers were the fans who missed out on seeing American Pharoah and Beholder, two of the very best from this generation, square off in a battle of champions. I am tempted to suggest American Pharoah would have come off best. 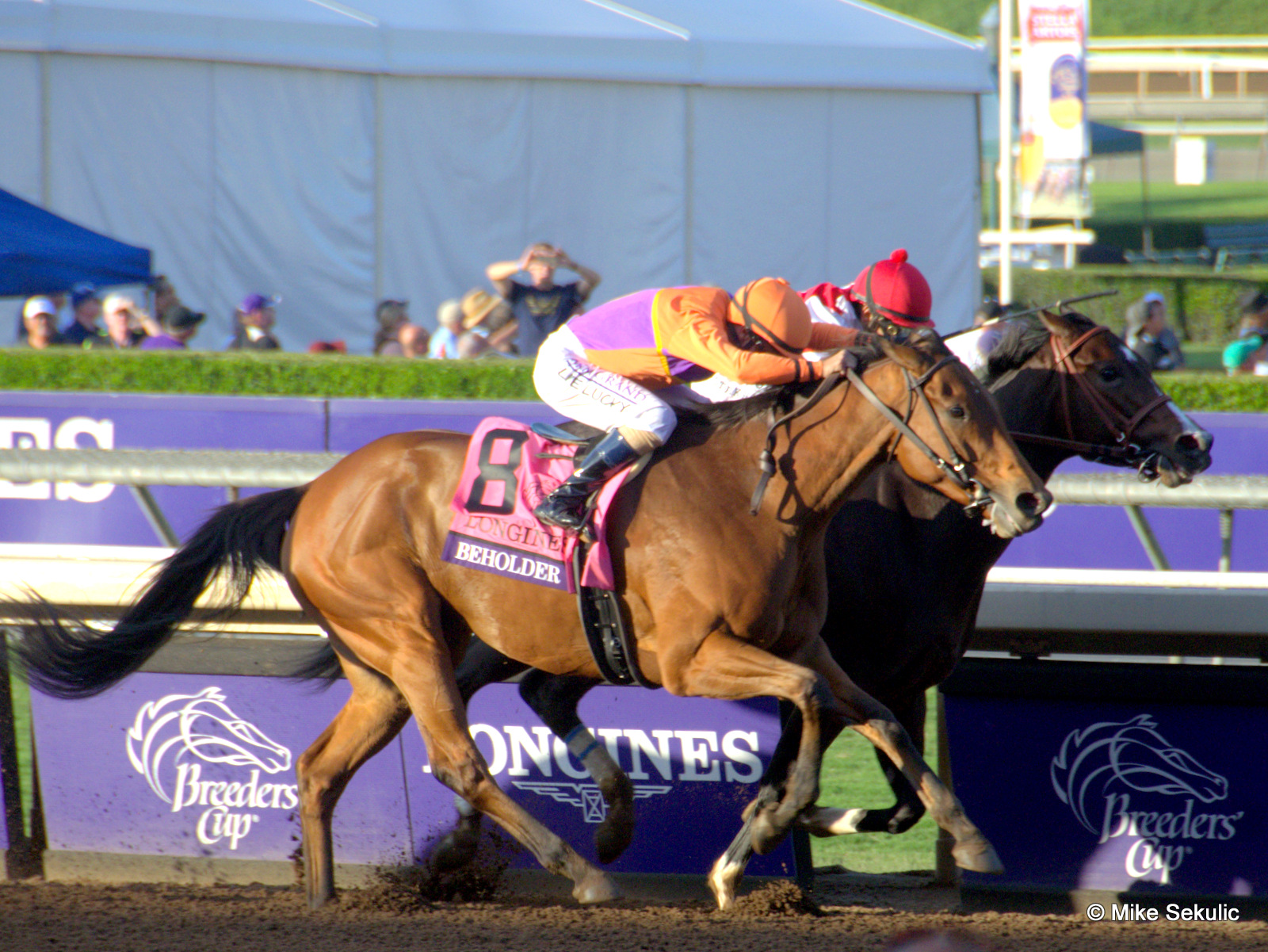 The good news is that trainer Richard Mandella immediately announced plans to bring her back in 2016. With the Breeders Cup scheduled to be run at Santa Anita, she might still get her shot at a Classic win. With the equally brilliant Shared Belief expected back racing in the older horse division next year, the Classic could be a ding dong battle.

Another brilliant prospect whose star shone bright on Breeders Cup day was Songbird. The 2-year old filly was nothing short of spectacular when annexing the Breeders Cup Juvenile fillies by five lengths over the regally bred Rachael Valentina.

She finishes the season 5 for 5 and a lock for division champion honors. After running a full second faster that the juvenile colts did later on the card, Songbird left the door open to targeting either the Kentucky Oaks or waiting a day later to face the boys in the Kentucky Derby in May.

In the Breeders Cup Juvenile Colts, Nyquist also kept his record perfect (5-5) while stamping himself as the early future book favorite for the Kentucky Derby. It's a long way until May and one can't help feeling the fillies are a bit ahead of the colts at this point in time. Without a clear-cut standout, the road to next year's Derby should be a lot of fun for racing fans. Of course, it will be hard for any horse to follow in the footsteps of the American hero, American Pharaoh.

There was one more performance this year worth noting. Over the second half of the season, the 3-year colt Run Happy closed out the year with five consecutive victories, including the Grade I King's Bishop and the Grade I Breeders Cup Sprint to secure the sprint division championship.

It might be an overused term, but this horse is a freak. He is fast and he just keeps on running. If he keeps getting stronger and more mature, he could prove to be unbeatable at distances of a mile and under. The Metropolitan Mile anyone?

It's not clear yet, but here's to hoping the Turf Mile winner Tepin comes back for another season. A head and a nose kept her from a perfect 7-7 season. In the process, she simply destroyed some of the best turf milers in the world and it looks like the tank is far from empty.

As the 2015 horse racing season comes to a close, horse players should be on the prowl for the best free bets being offered by race books. These free bets might be a great way to get down some future book bets on horses like Songbird or Nyquist. If you find some of the best free bets, you should do your homework and make those free bets count.

Tony Samboras is a horse Racing enthusiast and author from the U.S. As a lifelong fan of horse racing Tony has written about the sport for many online publications. To see more from Tony about horse racing and sports in general visit www.freebets.com.au.