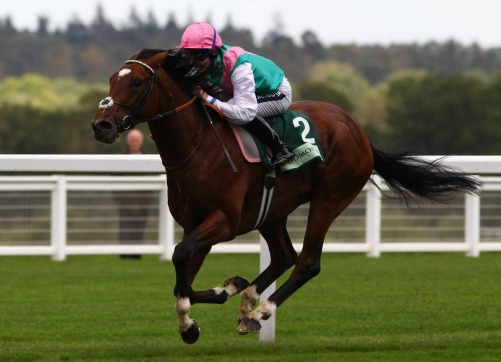 The career of the outstanding Frankel, who ended his 14 race career undefeated, is considered the finest of any race horse in history.

He was able to race over a variety of distances ranging from 7f to 1m 2 1/2f. Aidan O'Brien's Excelebration, himself a winner of 12 stakes races, was runner up to Frankel on four occassions and other top class horses who tried include Cirrus Des Aigles, Farrh, Canford Cliffs and Dubawi Gold.

Here are a few remarkable facts concerning the outstanding Frankel:

He was named after the famous trainer Bobby Frankel from America

He was trained by the brilliant trainer Henry Cecil who was abe to nurture Frankel's career despite suffering himself from terninal cancer.

Timeform awarded Frankel the highest rating in its history at 147, above such legends as Brigadier Gerard, Sea Bird and Tudor Minstrel.

The World Thoroughbred Racehorse Rankings Committee also considered him the best racehorse with a rating of 140 and above such thoroughbreds as Shergar, Dancing Brave and Alleged.

In 2013 Frankel was retired to stud and covered 133 mares in his first season with 126 getting into foal for a fertility rate of 95 per cent.

His percentage of sired Group winners is second only to Galileo with 27% of runners winning a stakes race.

There was talk of his competing in abroad - could the outstanding Frankel race at Lonchamp in France?

The suggestion by Teddy Grimthorpe, racing manager to Prince Khaled Abdullah, the owner of Frankel, that the great horse may race in France in September after running in the Juddmonte International at York later this month has raised plenty of eyebrows within the Betfair Tips Horse Racing community.

Grimthorpe put the idea forward at an interview following Frankel’s latest demolition job, his six-length defeat of the smart Farhh in the Group 1 Qipco Sussex Stakes at Glorious Goodwood, suggesting that the Prix du Moulin at Longchamp in mid-September might serve as an ideal stepping stone between the two top British races.

The surprise element is that the 10 furlong Juddmonte International represents the horse’s first attempt beyond a mile that may necessitate a change in plan by connections, whilst the Champion Stakes is also run at a mile-and-a-quarter.

Dropping back to a mile for the Prix du Moulin has been suggested by some commentators as a potentially muddling move when the horse is being primed to stay further in what had been expected to be his last two races this season and possibly for good. The Sir Henry Cecil-trained superstar, who will surely feature heavily in York Ebor 2012 odds markets, is likely to be every bit as good at the longer trip and it appears that all connected with the great horse believe he would not be inconvenienced by going up and down in distance and seem prepared to keep him racing at regular monthly intervals.

The outstanding Frankel has become a racing sensation over the last three seasons in which he is unbeaten in all 12 starts, eight of them at Group 1 level. The son of Galileo appears to be getting better with every run and his presence on course invariably adds many thousands of race goers to the gate to see the horse many believe could well be the very best we have ever seen.

Nobody who got up early to watch the mighty Frankel go through his paces on his final gallop at Newmarket could have been disappointed with what they saw, as the world’s best horse put up a stunning exhibition to beat his galloping companion by as many as 20 lengths, writes Elliot Slater.

The upcoming Group 1 Qipco Champion Stakes at Ascot on October 20 is widely expected to be Frankel’s final competitive race – and fans’ last chance to favour the horse with a bet on horse racing.

The brilliant unbeaten colt looked imperious under his regular work rider, Sean Feathersonehaugh, who got an immediate response when he asked the son of Galileo to quicken past the 102-rated Midsummer Sun, ridden in his work by the wonder horse's ever-present big-race partner Tom Queally.

Powering away with the minimum of encouragement, Henry Cecil's charge left his work companion trailing in the distance, as he completed a piece of work that left all observers in no doubt that the great Sir Henry Cecil-trained colt remains as good, if not better than ever, and will surely win on his swansong unless something completely unexpected occurs.

The winner of all 13 career starts and, most recently, a seven-length scorer from the smart pair of Farhh and St Nicholas Abbey in the Juddmonte International Stakes at York in August, it appears all but certain that the 1/10 favourite will be in action for  the final time at Ascot.

He will fittingly be faced by two of the world’s other leading performers – Cirrus Des Aigles and Nathaniel, two horses proving popular in the placepot tips today. While neither of his challengers is expected to beat the favourite, the feeling is that he might be given more of a workout than has been the case at any other time this season, and the prospect of the three-cornered fight has already seen bookings for the showcase Group 1 contest go through the roof.