Dubai horse racing started life at the Nad Al Sheba racecourse until the Meydan racecourse was built on the same site in 2010. To say that this was an ambitious enterprise would be understating it.

The grandstand alone is over a mile in length, accommodating 60,000 spectators and the course includes a horse racing museum, Gallery,  star hotel and 9 hole golf course. Out of season it is used as a business centre.

Dubai horse racing takes place between November and March on a 2400m left-hand turf track and a 8.75 furlong left-hand dirt track. Racing highlights include the Winter Racing Challenge, Dubai International Racing Carnival and the Dubai World Cup Day which boasts over US$26.25 million in prize money.

The Super Saturday meeting is held on Saturday 10 March and acts as a major prep event for Dubai World Cup Day. Despite the general air of luxury a wide range of viewing options is offered including low cost simple seating.

One of the most famous horses racing at this iconic venue was the chestnut gelding, African Story.

1998 he showed early promise on his debut as a 3yo by winning the Prix Borax over 1600 metres at Saint-Cloud Racecourse on 9 November 2010.

His four-year-old season continued in good style when he won the Prix d'Ailly over 1500 metres on the synthetic Fibresand course at Deauville Racecourse on 10 March 2011.

Having placed in his following two races he stepped up in class to contest the Group 3 Prix du Palais-Royal in June, finishing 4th  behind Sahpresa, Moonlight Cloud and Evaporation.

His next two races that season also saw him make the frame but at the end of the year he was sent to Dubai to be trained by Saeed bin Suroor.

He began his 5yo season for the Godolphin team and his new owner Sheikh Mohammed by winning a handicap race over 1400 metres on the Tapeta surface at Meydan Racecourse.

Having placed in his next race he contested the Group Three Burj Nahaar over 1600 metres on 10 March. Frankie Dettori took the ride and won "comfortably" by four lengths from Snaafy,  while the odds-on favourite Musir could only manage third. 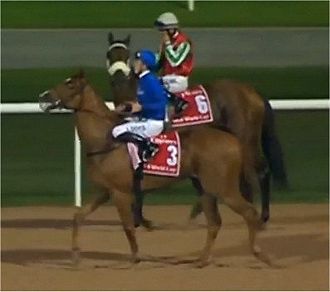 Next up, after a 3 week break, he was strongly fancied in the Group 2 Godolphin Mile, winning by four lengths from the South-African bred Viscount Nelson.

Travelling to Hong Kong in May for his final outing that year saw him finish sixth to Xtension in the Champions Mile at Sha Tin Racecourse.

His 6yo season in 2013 saw him repeat his 2012 success in the Burj Nahaar. Mickael Barzalona steered the 11/4 favourite to victory by two and a quarter lengths from Capital Attraction.

Although well supported in his attempt at the 2013 Dubai World Cup he only managed a fifth place in a field of twelve runners.

Two rounds of the Al Maktoum Challenge at Meydan, in February and March, kicked off his 7yo season, in which he achieved a 2nd and 8th place respectively.

At the end of March 2014 he made his second attempt at the Dubai World Cup with a very different result.

He stunned his rivals by winning in a new record time of 2:01.61 putting in their place a high class field of 16 which included thoroughbreds such as Ruler of the World from Ireland, Hong Kong’s Military Attack and Akeed Mofeed and Grade 1 winner Ron The Greek from the US.

Of the 3 races in his final season as a 8yo, he could only manage one win, which was in the third round of the Al Maktoum Challenge where he won by a neck from Prince Bishop.

After the race, Saeed bin Suroor announced African Story’s retirement, praising him as a tough and reliable racehorse, capable of adapting to different environments wherever he raced around the world..

He will forever be remembered for his achievements in the annals of Dubai horse racing.

Fashion at the Races takes place at the Dubai World Cup where women and men compete to impress the judges who are looking for the best in style, elegance, creativity and practicality.

In 2017 Topshop/Topman were invited as Style partner to demonstrate through pictures and video how competitors can look their best on the day. 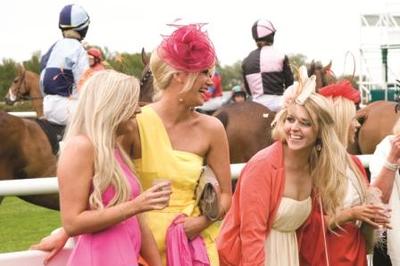 Fashion at the Races

The Dubai horse racing authorities are keen to encourage the best horses throughout the world to compete at the tracks and make it as easy and cost effective as possible for trainers to bring their horses to Dubai.

The Dubai Racing Club will subsidise the cost of travel for a horse providing it runs at least twice at Meydan.

Two grooms are provided for trainers occupying barns of 10 boxes 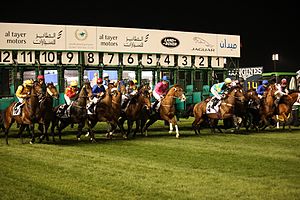