The Cheltenham Festival is rightly considered the Queen of Festivals - but don't follow the crowd just follow the trends! 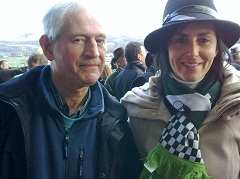 However Tanya Stephenson of Channel 4 Racing is certainly worth following and I was lucky enough to catch up with her at the trials.

There's no doubt Tanya also has a great fashion sense and if you want some tips on what to wear at Cheltenham. Click Here

PRICE  Only 5 winning favourites in the last 43 years

Form - 12 of the last 20 were ex bumper horses particularly having run in previous year's Champion Bumper (2013 -  Briar Hill, The Liquidator)

PRICE  Favourites do not have a good record

Form Most came 1st or 2nd last time out.

Finished in first 2 on any completed chase start that season in GB or Ire.

No more than 5 runs over fences

TRAINERS  Irish 9 winners from the last 15

BREEDING 3 mares have won this in 87 years.

PRICE  Favourites have a good record

TRAINERS Willie Mullins has won 2 from last 6 E. O'Grady has won twice and 4 of the last 8 have been Irish trained. Not David Pipe or Nicky Henderson

Form Most will have won over at least 2m4f if tried at the trip. Will not have finished outside the first 4 in any completed hurdle races. Has been placed in a graded race. Challow winners have a poor record. No winners wearing headgear. Previous Champion Bumper contestants who finished in the first 6. Won a novice hurdle at Cheltenham this season.

BREEDING  Mares have a poor record.  13 from last 15 were NH Bred

PRICE  Favourites have a poor record

TRAINERS Irish trained will be placed at least. Possible winners this year are Ballycasey, Don Cossack or Carlingford Lough. Not run in past 27 days but had a run this year. Paul Nicholls has won twice.

Form Most Will have finished 1st or 2nd last time out. Won a graded chase over 2m5f or chase over 3m. Run between 3 - 5 times over fences. Will not have finished outside the first 3 in any completed chase.

BREEDING  National Hunt bred. Previous flat runners have not won in past 15 renewals

RATINGS  Has a hurdle rating of at least 134.  Will have won a listed hurdle.

Form Will have won this season and come 1st or 2nd last time out unless failing to complete. Won a grade 2 chase. Had no more than 4 runs this season. Will have won 1/2 of all NH starts and had at least 7 runs over fences.

RACES 22 from last 29 won or placed at Cheltenham Festival before.

BREEDING  No mare has won - French breds have a good record

AGE Aged 5 or 6 or unbeaten

PRICE  No favourite has won in the last 8 renewals

BREEDING  All 21 winners have had diferent sires

HEADGEAR No winner has worn headgear

Form Course chase form is a significant advantage, no more than 3 races since October, placed at least last time out

RACES At Fishers Cross or Zarkandar are unlikely winners, placed at least in the previous Cheltenham Festival

PRICE  Winner likely to come from first 4 in the betting, 18 of last 21 were favourite or second favourite last time        out,Only 4 from the last 26 Triumph Hurdle favourites have won

TRAINERS A King and N Henderson have good records, Irish have poor record

Form If raced on the flat run at 1m4f at least, won a Group 1 hurdle, Won at least half of all hurdle starts, won  or      placed in a Group 1 last time out, Irish Leopardstown G1 winner to be placed at least,

RACES Adonis Hurdle at Kempton, Winner of Juvenile Hurdle at Cheltenham in November is likely to place

BREEDING  Mares have a good record, 13 from last 17 bred by a Group 1 winning sire

Form Has won a hurdle race over at least 2m4f, run at least 3 times over hurdles, 1st or 2nd last time out in graded class, not raced on the flat, course form an advantage

HEADGEAR No headgear - only one winner